The invisible man syndrome: Men over 40s having trouble dating

The express recently run an article that talked about the invisible man syndrome discussing David Beckham and how he is losing his sex appeal at 39. 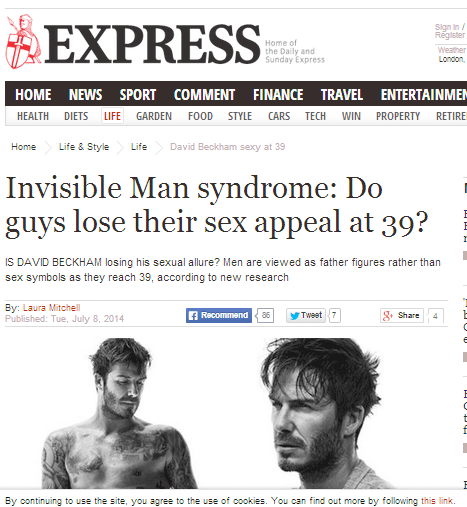 At the same time, using the exact same photo they posted a feature on how sexy David Beckenham.

Now apart from the schizophrenia approach. They raise a good important discussion on sexual market value. Do men become sexual invisible at the age of 40? Well yes and no. The thing is women have very high standard when it comes to be finding a man sexually attractive only based on looks. This is illustrative by a survey done by okcupid that found that women considered over 80% of men below average attractiveness.

Women take a lot more into consideration, social standing , success, confidence, sense of humour.  What is clear is men at the age of 40 are actually getting more messages on internet dating sites, than their 20 year old counterparts. As women get older they are more certain of what they are looking for and unlike when they are in their 20s they are not getting as many messages themselves so they are taking the initiative.

The truth is as we age physically attractiveness for both men and women decline. However a man who has kept himself in good nick in his 40s will have a lot easier time in the dating market than his female equivalent.

Having said that Victoria has aged quite well herself, as this picture from recent Wimbledon shows them together.